My preference for Euclidean, meaning easy and strict forms, allows it that I can expose them to nature because they can assert themselves into this complicated world of forms easier.“

An incredible synergy: Stylised medieval atmosphere and the game between space, time and light. An interplay between art and wine. The work of art „Silver Stele“, created by the artist Heinz Mack, co-founder of the Zero movement and multiple participant of Documenta, is one of the highlights of Artthunt. Francesco Ricasoli, host of Castello di Brolio and winemaker, gives this piece of art the right space. With the symbiosis between art and architecture is a special field of tension created, beginning with Tudor-style and going towards Euclidean forms. We talked to Heinz Mack about his piece of art and involve three wines from Castello di Brolio into the dialogue.

The Interview with Heinz Mack 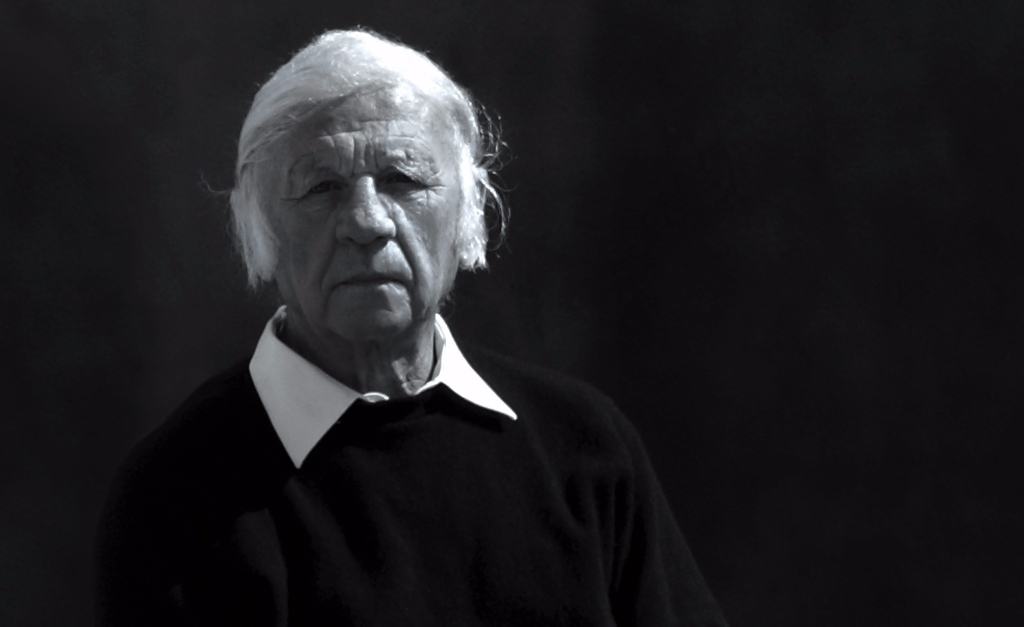 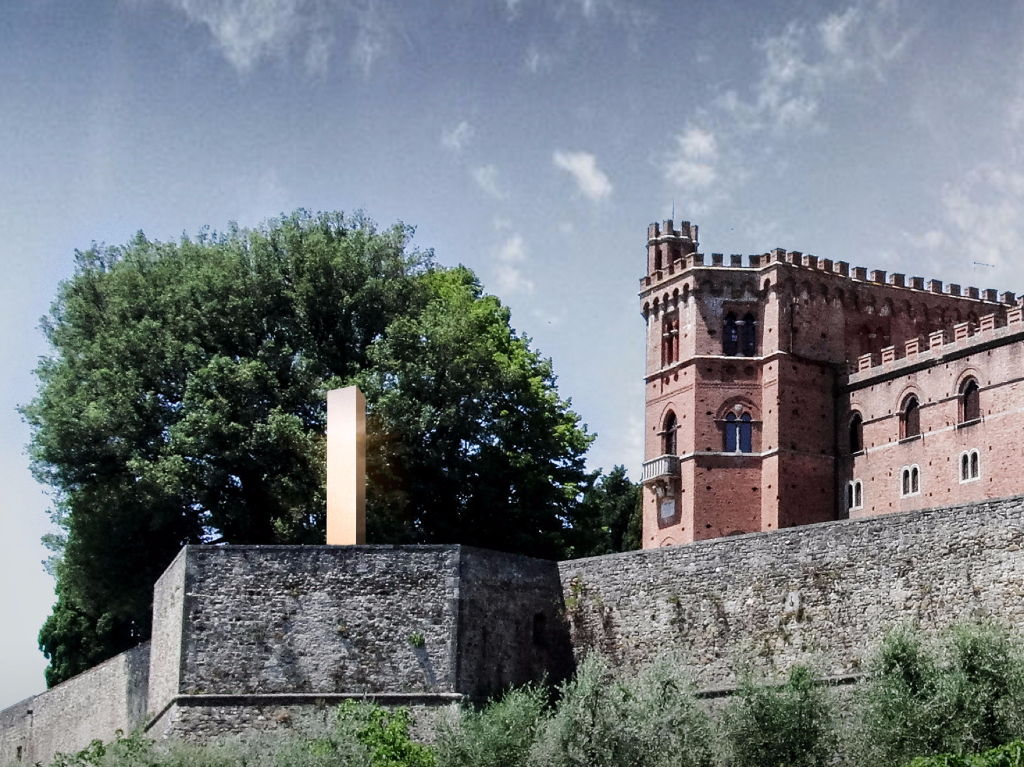 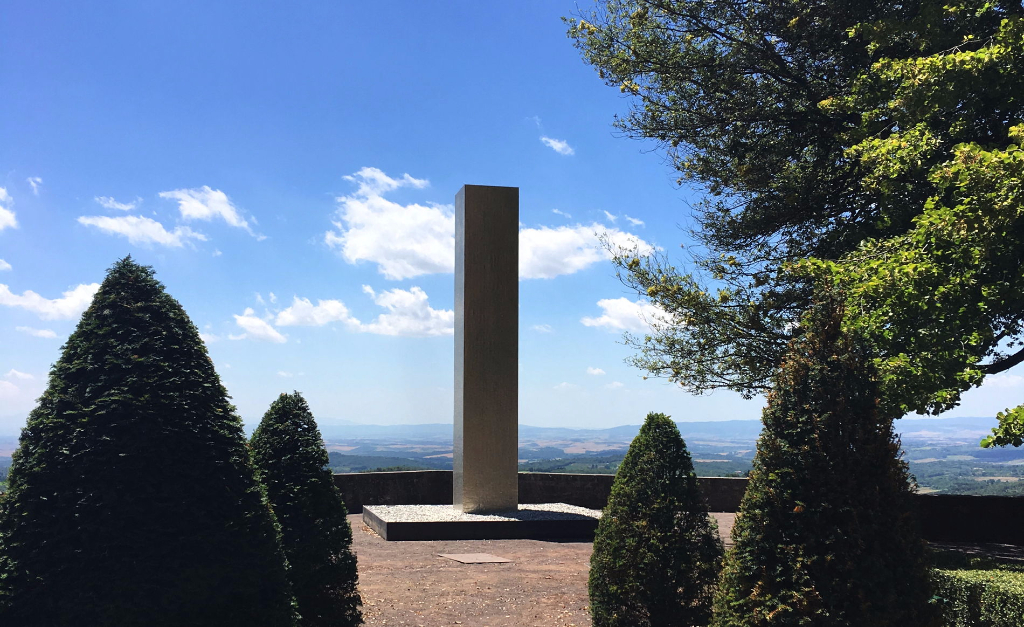 Your installation currently stands on a vineyard in the Tuscany, surrounded by idyllic vineyards. A good place?

I cannot separate the place from the sculpture. If I put a sculpture in different rooms, no matter if that is inside or outside, its appearance is going to be a different one every time.

The ideal moment would be if a special room, a special light and a special observer come together.

This seems to be natural, but it is not.

On the terrace of Castello di Brolio in the Tuscany appears a Silver Stele in Mediterranean sunlight. Its appearance and presence stands in contrast to the decor and architecture of the castello. The distinct character of the stele has to be considered as the counterpart to its surroundings. The material of silver mosaic withdraws from the walls of the castello because it has its own value and its own optic strength.

Your piece of art „Silver Stele“ processes light as an object. Why?

My sculptures become alive when they have the right light. Because they are objects of light, instruments of light and expression of its energy.

Light always has something „right“ in nature, that means the best possible relation to space and time; unique and not to be changed.

Although it seems as if I have only dedicated my work to light, I have to explain that it has only always been my intention to create objects which have an immaterial appearance; therefore I use – especially and before anything else – light and movement.

The mosaic surface of the Silver Stele gives the mighty pillar an immaterial appearance when there is solar radiation.

Silver Stele is a rectangular object. Why this perfect form?

My preference for Euclidean, meaning easy and strict forms, allows it that I can expose them to nature because they can assert themselves into this complicated world of forms easier.

In comparison to an elegant pillar, a column is more strict, more elemental, more archaic and more sculptural in its prismatic form. The column height of six metres, the material mosaic and the silver colour make this appearance stronger.

What is the first thought that comes to your mind when you look at „Zero“ today, which is something that goes from an old condition to a new one?

ZERO was founded in Düsseldorf in 1957/58 and has to be seen as a new beginning for art. Together with Otto Piene and many other artists – later also Günther Uecker – we discovered new ways of creating and aesthetic ideas in which light and movement were dominating to overcome the handed-down art understanding. Although my pieces of art from the ZERO time are now going through a renaissance, this is history now.

My Silver Stele can be seen as a conversion in so far, as it refers to antique role models. Since then I understand my steles as a last formulation of the human who stands upright – with dignity – in an unlimited room. My column stands in an historical way in relation with the grave steles of the Greek, who were showing vertical equivalent of the horizontal grave.

Wine is also the result of a conversion. Which wine is stuck with you?

Every now and then I like to enjoy a glass of red wine. Because of that. There is always a good bottle of Chianti in my house. 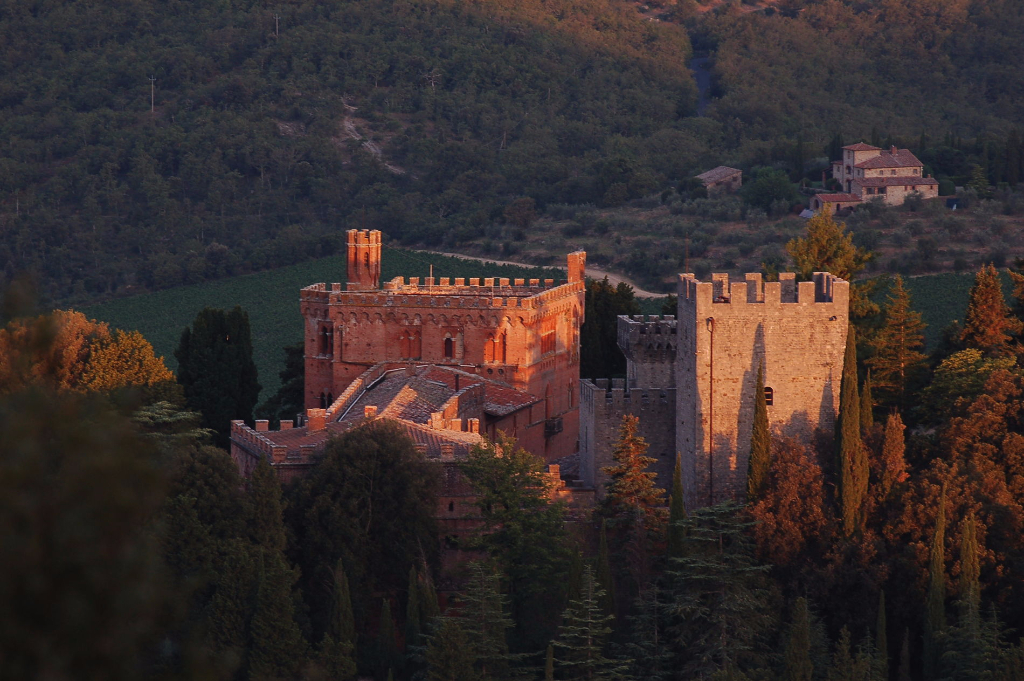 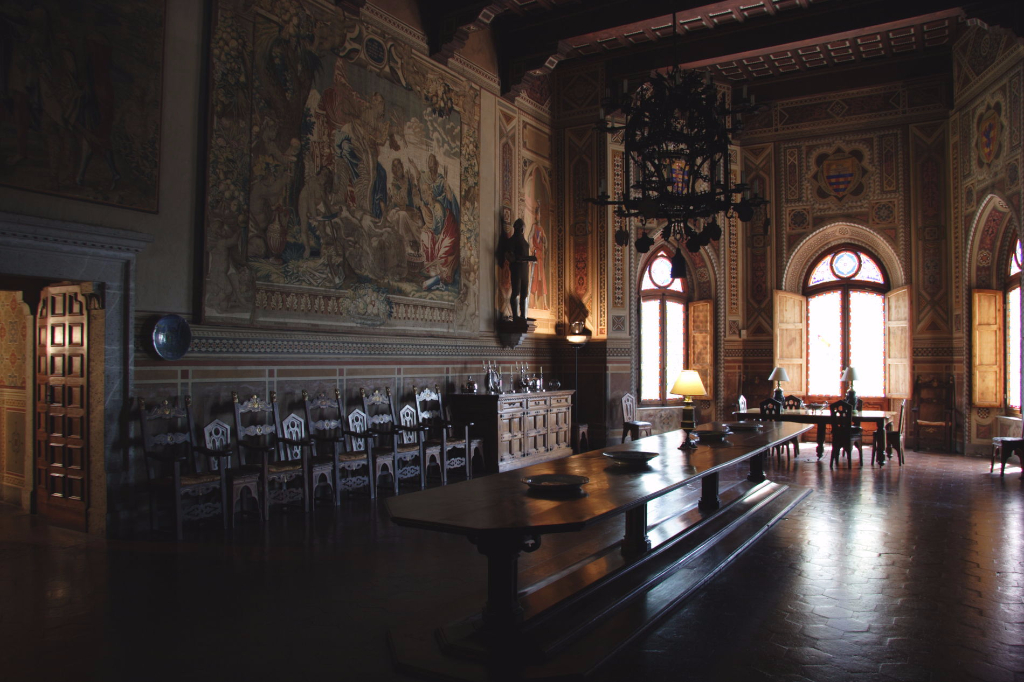 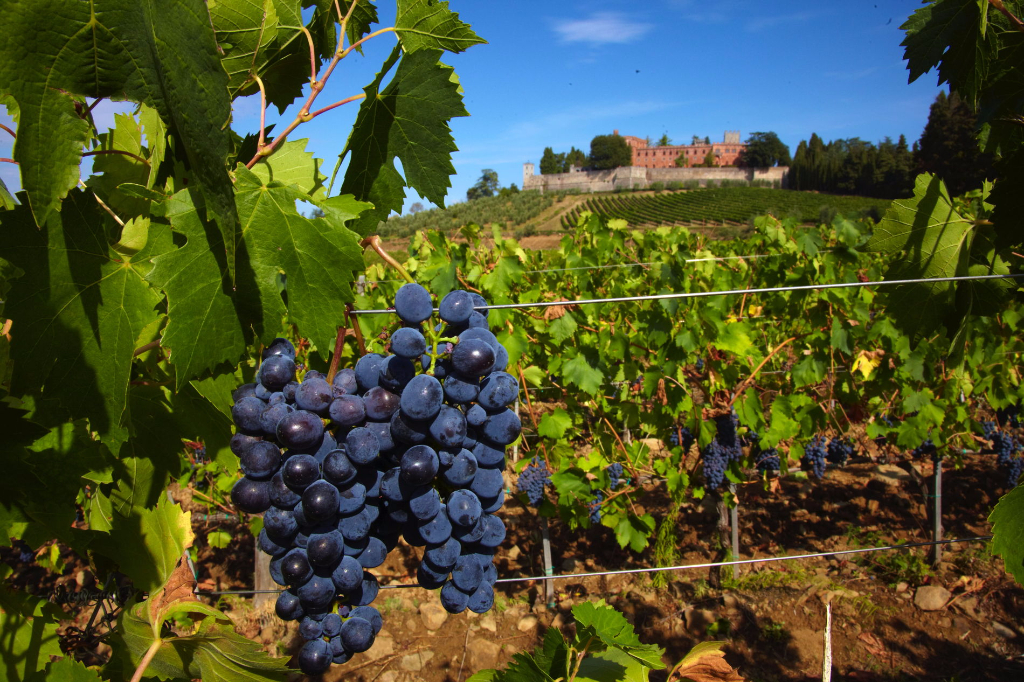 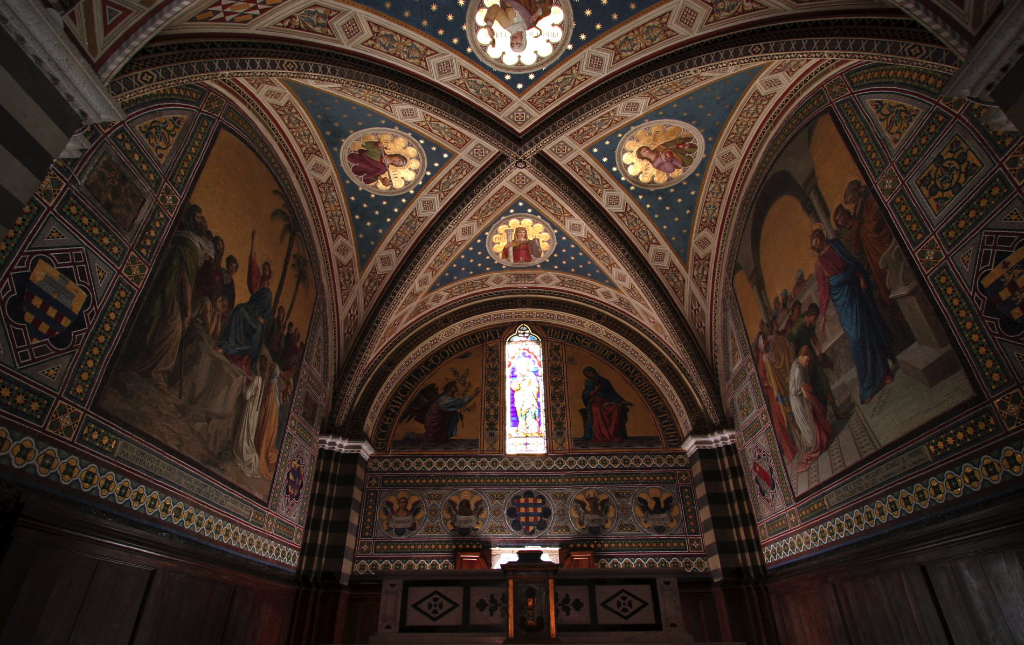 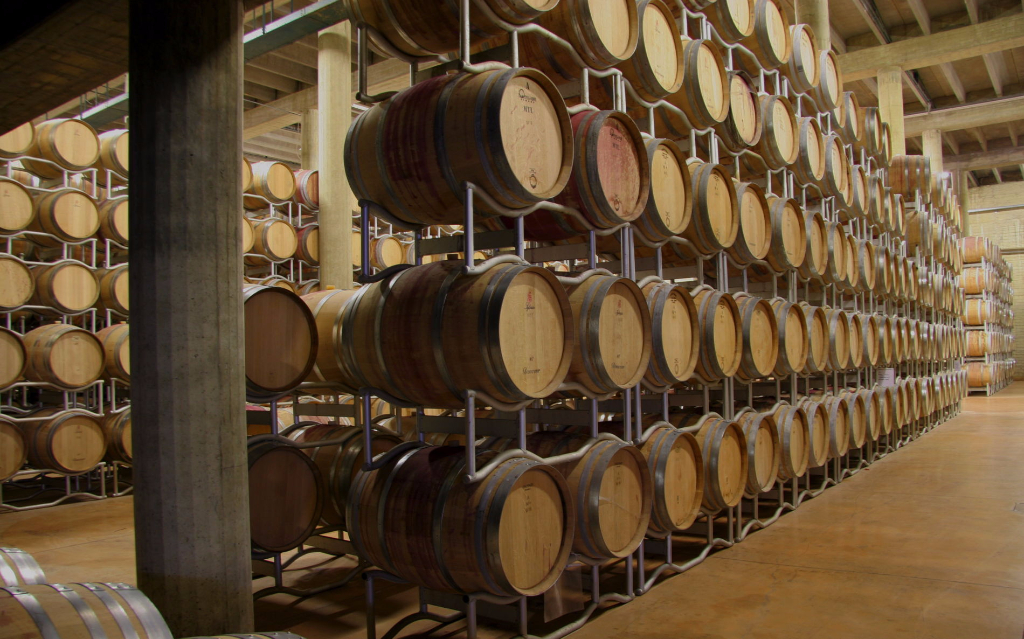 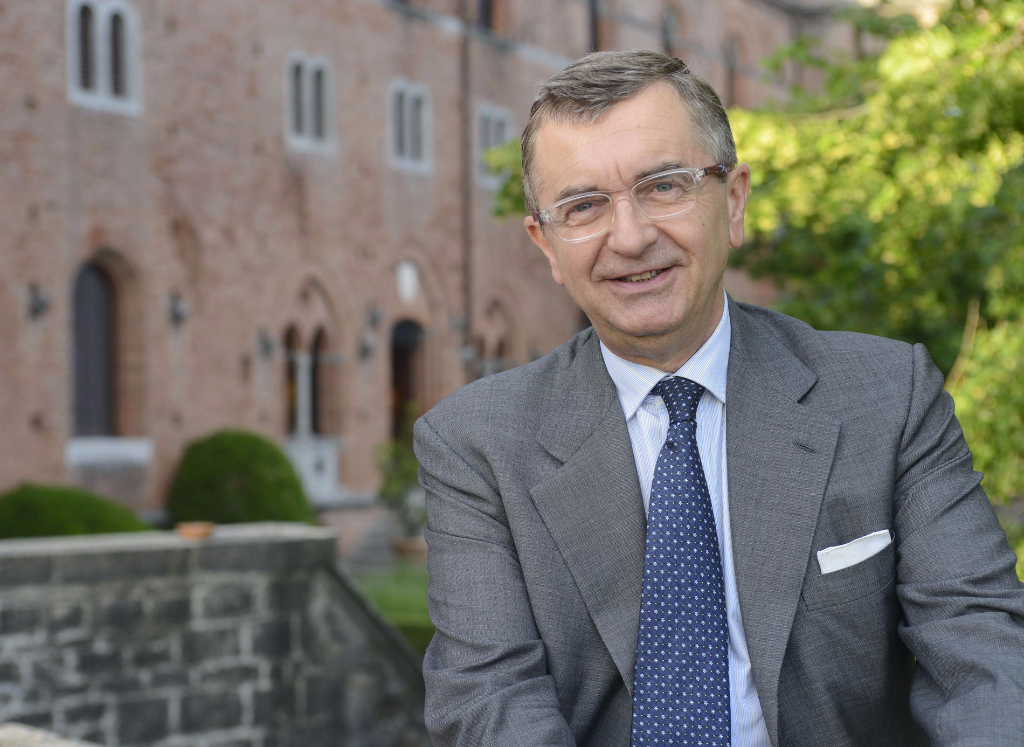 Although tradition and modernity are telling time history with the connection of art and wine, wine making cannot be seen as a obligation. Wine only fell in Francesco Ricasoli’s hands in 1993. Because of a momentary sale of the winery to a Canadian company, reputation, house and business got into a imbalance. Francesco Ricasoli had to help. Here are three of his wines from 2013 and 2014.

Chianti here you are. In the foreground stands the game of nuances between red and black berries. Young tannins gives the wine a bit of unrest, but they also make it tense that way. Tne grapes are all from around the Castello di Brolio. Mind cinema resonates.

A wine with beginners segment. There is tobacco and a bit of tar in the nose. On the palate there is sour cherry, which is typical for Chianti. The wine is lacking on tension, but its home is in the beginners segment anyway.

Best Chianti in the series. Currants, plum and raisin dominates in the nose. It has a good structure, the tannins are involved nicely. Good pressure on the outflow.